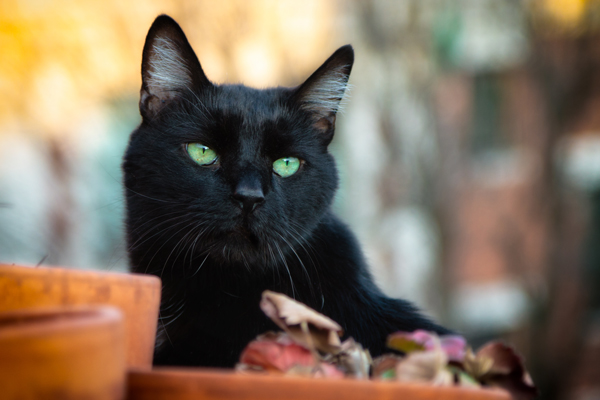 A friend in Hawai’i during dinner a few years ago mentioned that a black cat had crossed his path the previous day while he was en route to some big, math-related test for his big, math-related master’s degree. When he specified that it was a black community cat (the University of Hawai’i has a big community cat population), our group gave up three simultaneous reactions to black cats.

“Aww!” I said, because I’m me. And because I enjoyed the company of the University of Hawai’i community cats more than most students.

“Oh!” said my Japanese friend — with a smile.

Most understood my American friend’s reaction — “Did you feel jinxed for your test?” some people asked — but I preferred my Japanese friend’s response: “But that’s good!”

Black cats are lucky in a lot of cultures. Photography ©earth2015 | Thinkstock.

Black cats and luck — an overview

Unlike much of the western world, Japanese culture sees a black cat crossing your path as a good omen. In fact, black cats are generally seen as good luck in Japan and much of Asia. My Chinese mother, the Feng Shui master, specifically put her black cat’s bed on the north side of her home to ward off evil.

“Tiptoe is a very lucky cat,” she said. “Good luck follows her.”

I think Tiptoe just likes that her bed is nearest the coveted space heater in the winter.

So are black cats good luck? Let’s look at these good black cat luck superstitions around the world:

English superstition says that giving a bride a black cat on her wedding day will bring her good luck in her marriage. It’s also thought that newlyweds with a black cat in their home will have a long, happy life together, and the black cat will ward off evil spirits. In much of the UK, the black of a cat is a lucky color.

While I don’t necessarily condone giving cats as gifts, newlyweds or spouses-to-be should rejoice in sharing their home with a black kitty.

If you’re a woman still looking for that special someone, Japanese superstition says a black cat will bring a single woman many good suitors.

You might have seen the “Fortune Cats” or Maneki Neko that populate Japanese culture. Those little cat figurines with the raised paws are meant to draw good luck, wealth and prosperity to their owners. Often they are white, but Lucky Cats also come in black.

A black Lucky Cat not only brings luck but also frightens away demons, evil energy, and stalkers. (Yes, stalkers.)

And while we’re on the subject of gods and demons, in Norse mythology the goddess of love, fertility and beauty, Freya, rides on a chariot pulled by two black cats. To win favor with Freya, farmers would leave bowls of milk for her companions in their fields. Freya would then bless them with a good harvest.

4. Black cats in the audience help a play

Cats are excellent audience members. Just ask my cat Brandy when I am moved to dance when my playlist cycles through to “Build Me Up Buttercup.” To theater folks in many cultures, there is no better audience member than a black cat. If a black cat finds its way into your audience on opening night, your play will have a long and prosperous run.

And in the south of France, black cats have been called “matagot” and are known as “magician cats” or even “money cats.” If shown the proper respect — like being given the first bite of dinner, having a nice bed to sleep in or having a home even after their owner’s death — the matagot will reward their person with wealth and good luck. (This belief does have some ties to black cats and negative connotations of witchcraft, but I choose to look at it as those who do not treat their cats well get their comeuppance.)

English sailors could probably have used a matagot in their home to bring them some extra wealth. In ye olde times, black cats were thought to be so lucky and such and assurance that sailors would return safely home from sea that many black cats cost so much as to be unaffordable for seafarers.

Black cat or not, I’m sure most of our feline family members would agree that having the first bite of our dinners is well within their rights.

Plus, check out the reasons there are myths about black cats in the first place >>

This piece was originally published in 2015.

Read more about cats and luck on Catster.com:

We think we can control our cat’s behavior. Laughable! We sometimes put in boatloads of research in our pursuits to train our favorite kitties and certainly come up with expert suggestions; however, ultimately, the cat trains us. Here’s a little feline feedback on humans’ attempts at training them — take it with a grain of...

When you buy through links on our site, we may earn an affiliate commission. Luckily, a kitten’s instinct to bury or hide its waste is strong. As long as you provide a nice litter box setup, your kitten is likely to catch on quick. Related: Tips for Choosing the Right Litter Box and Litter Box...