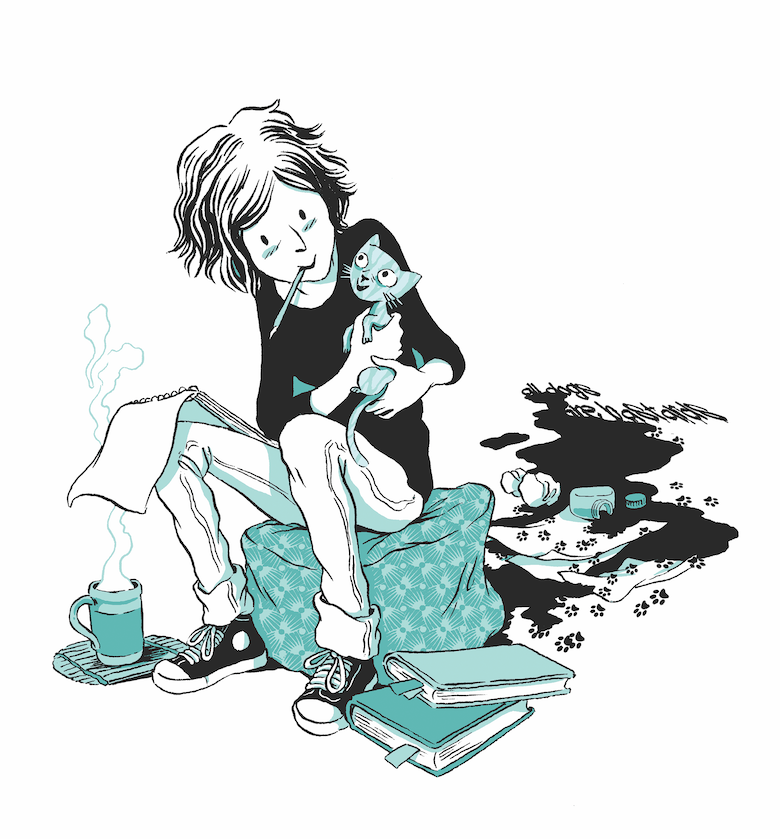 A few years ago, the novelist Margaret Atwood decided to write about cats. Her revered bibliography includes The Handmaid’s Tale — a dystopian book that became a hit TV series — but for her new project, she embraced the medium of graphic novels.

Collaborating with the illustrator Johnnie Christmas, she crafted 2016’s Angel Catbird, which stars a part-cat and part-bird superhero who inhabits a futuristic world. It’s a tale partly inspired by her childhood days when she’d draw “flying cats with wings,” as she told me during an interview at the time of the book’s release.

Since the publication of Angel Catbird, a cluster of feline-focused graphic novels have emerged. Also from 2016, the writer Sam Sattin and artist Chris Koehler explored animals surviving in a post-apocalyptic kingdom for Legend: Defend The Grounds. The series opens with a pack of dogs prowling a blighted environment, before introducing a clowder of competing cats commandeered by their leader Bagheera.

“The dog tribe is more democratic in its leanings, forming somewhat of an oligarchy, while the cats are more dictatorial, with a monarch at their head,” explains Sam about the dynamic between the clans. The felines also enjoy insulting their canine counterparts with barbs like “superstitious poo eaters.” Chris adds that he used different degrees of saturation in his illustrations to reflect the tribes’ varying personalities: “The dogs see the world more optimistically and with more wonder, and the cats are more cynical and grounded.”

Other graphic novels have embraced a similar concept of whisking cats away to futuristic realms. Captain Ginger debuted in 2019 and depicts kitties navigating a hostile universe on board an interstellar vessel. The project was conceived by the writer Stuart Moore (who has contributed to the Batman and Deadpool franchises) and the artist June Brigman (known for her work with Marvel Comics). “I love cats and I love outer space,” explains Stuart when asked about the inspiration for the book.

Captain Ginger was also influenced by the creators’ own felines. Stuart based the ship’s captain on his feline Rocko. “Like most gingers, he’s pretty loud and demonstrative,” he says. June revealed that Buddy — “the cat who’s in charge of litter box duty” — is based on a rescue who had a “wild eye” and was missing part of an ear but was “as sweet as could be.”

Captain Ginger features cats navigating a hostile universe on board an interstellar vessel.

Graphic novels frequently channel the fantasy element of living with a cat. Who hasn’t noticed their feline sitting in a cardboard box and imagined them voyaging the wild seas in a pirate ship? But kitty-focused comics also allow writers to convey emotional themes through a feline lens.

Published in 2018, Nancy Peña’s Madame Cat is a whimsical take on adopting a cat who decides they’re the owner of their human. The idea came about after Nancy brought her 3-month-old kitten Madame home and observed “a lot of silly things that made me laugh [so] I wanted to draw them to remember them.” Nancy describes Madame as “very cuddly but not very smart” — a characterization she portrays in an affectionate style.

In more heartrending fashion, Ursula Murray Husted’s 2020 A Cat Story was prompted by a trip to Malta to help her father’s recovery from lymphoma. Noticing the number of stray cats by the docks, Ursula wondered “what [the cats] were looking for” in life.

So, she wrote a story about Cilla and Betto: The former feline “feels that life will only be complete when she finds a typical quiet garden from a kitten story,” and the latter “is happy being a cat on the docks.” Cilla and Betto journey to discover a place where they can both be happy — and Ursula suggests that humans and cats have the same basic goals.

“We want to love and be loved, we want to be warm, full of good food, and have our friends and family be safe,” she explains. “Writing a cat character is very much like writing a human one — just fuzzier.”

Read Next: How to Get Your Cat Into Movies

What is a Cat Dental Emergency?

Cat dental problems are among the most common medical issues seen in cats. If unaddressed, dental problems can lead to a variety of consequences including bad breath, loose teeth, oral pain and difficulty eating. In my experience, the most common feline dental emergency is a sudden inability to eat because of a mouth that has...

Felines are built to excel in athletic pur­suits. Their superiority in speed, precision and flexibility are only matched by their remarkable ability to sleep 12 to 16 hours a day. There are no gold medals in sleeping, although cats are certain there’s a loophole in the World Feline Bylaws — they’re just not motivated enough...