Do Cats Get Lonely Or Are They Fine Without Other 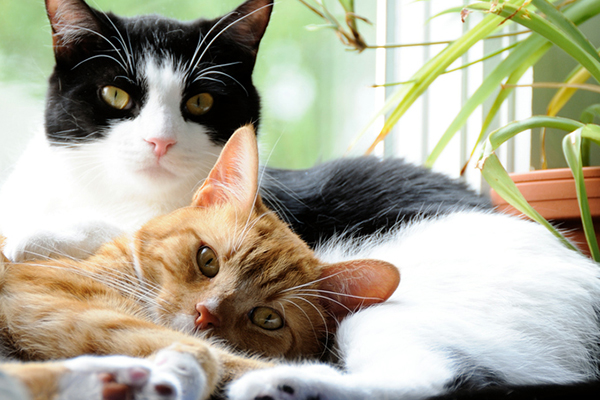 Tigers live as solitary hunters in jungles. Lions live in prides in grasslands. But what about our domestic cats? Are they loners like tigers or social like lions? Yes and yes, and no and no — depending on the cat and the situation, experts say. We talked to some of those pros to try to answer the age-old questions: Do cats get sad and lonely? And do cats need other cats?

Do cats get lonely or are they fine flying solo? Photography by ivanolianto/Thinkstock.

Do cats get lonely? Or are they happier in single-cat households?

The first step in answering, “Do cats get lonely?” is knowing that domestic cats are solitary when it comes to hunting and eating. Dogs may have a reputation for being more social, but that is only because they hunt in packs. Not so with cats, who don’t like eating too close to each other. Many parents in multi-cat households put their kitties’ food bowls next to each other, but this is a mistake, says Marilyn Krieger, a certified cat-behavior consultant in the San Francisco Bay area. “Cats have to eat, so they will, but they’re not very happy. It’s a little stressful,” says Krieger, who is also known as The Cat Coach.

Outside of mealtime, though, most cats have social needs. While some cats hate their own kind and must be the household’s only pet, feral cats form colonies, and many pet cats befriend each other.

“They have several complex social and cooperative behaviors such as caring for each other’s young,” says Dr. Leticia M.S. Dantas, D.V.M., M.S., Ph.D., a faculty member at the Athens-based University of Georgia Veterinary Teaching Hospital’s Behavioral Medicine Service, and a diplomate of the American College of Veterinary Behaviorists, says about feral cats. “The confusion comes from the fact that strangers are usually not welcomed. The group is usually formed by a family line — a queen and some of her litter that chose not to leave, not newcomers.”

And what about pet cats? Are cats sad when they’re the only cat in the household? “Domestic cats are a social species,” Dr. Dantas says. “Yes, you can have cats that are buddies because they really like each other and not because they have to be,” Krieger says.

Still, cats are able to survive as solo creatures, Krieger says, even if that isn’t their preference. And adult kitties have a territorial nature.

The answer to “Do cats get lonely?” is likely yes — if they’re kittens.

That territorial nature doesn’t typically kick in until adulthood. Kittens crave playmates, and they especially bond with their littermates. But even if you adopt kittens from separate litters, they will likely become instant besties.

“For most kittens, the way they learn social skills is by interacting and playing with each other,” Krieger says. “Most kittens do quite well together.”

Still, though kittens tend to be more socially flexible, “just with any species, some individuals are born not being comfortable around strangers,” Dantas cautions.

Matching your cat to a second cat

Do you have a cat-hating cat who must be by herself (a situation that might result from a kitty that got separated from her littermates at an early age) or a lonely cat who wants a buddy? It may be difficult to tell, as your cat might be clingy and needy with her human but not necessarily do well with another cat around her, Krieger says. It helps to know the history of both cats — the resident and the potential newcomer — if you want to predict whether the two will get along.

“Having grown up with others is not a recipe for success, since cats are individuals and some of them simply do not get along,” Dantas says. “Cats who are playful with other cats, were socialized to other cats as kittens and throughout their lives and do not have clinical signs of fear or anxiety have more chance of success.”

When choosing a feline companion for your cat, look for one that is a similar age, and therefore has a similar energy level. If you have an older cat, a kitten will torment and pester him with manic energy. “The kitten’s job is to be playful and explore their world and attack things,” Krieger says. “The older cat’s job is to take a nap.” If you have an older cat and want to adopt a kitten, get two kittens so that they can play with each other and let their older uncle relax in peace. Otherwise, look for an older best friend for your adult cat.

The next question you’ll have when asking, “Do cats get lonely?” is, “How do I introduce two cats?”

“Cats do … form very close bonds with each other,” Kreiger explains. “Even adult cats can become close companions if they are introduced correctly.”

Related: How to Introduce Your Cat to a New Cat

Introduce cats correctly by keeping them separate at first, Dantas says. This lets them get to know each other’s sounds and smells and gives their brains time to hopefully decrease the neuroendocrine stress response. Each cat needs her own food dish and litter area, and positive experiences should come with introductions, like treats.

Getting a new companion for a grieving cat

Are cats sad and do get the lonely— after their longtime feline companion passes on? When a cat dies, the loss leaves a void in both your life and your remaining cat’s life. The question is how soon cat parents — and their resident kitties — should seek new companionship. Dantas and Krieger recommend giving your cat (and yourself) time to grieve and stabilize. This may take a month or several months.

“Cats form bonds, but they only crave the company of the cats they are bonded with,” Dantas says. “A bond cannot be transferred from one individual to another.”

Krieger also discourages bringing in another cat right away. Even though your bereaved cat is lonely; this is stressful for your pet, as the new cat is an alien. “They know this cat is not their buddy,” she says. “They smell different, they look different and everything about them is different.”

Read Next: How to Make Your Cat Your Workout Buddy

Everyone knows of the lazy cat stereotype, but in reality cats aren’t supposed to lie around all the time. In fact, cats who live strictly indoors are often far too sedentary. “We’ve come to realize that cats kept exclusively indoors often don’t get enough mental or physical stimulation,” says Dr. Terri A. Derr, founder of...

Laid-back, yet lively and with looks to kill, this feline will snuggle her way into your good graces with one slow blink of her expressive eyes, one quick peek at her sweet smile and one quick touch of her plush coat. What’s in a name? Just the Exotic. One name, like Madonna. Sometimes known as...