Does Your Cat Love Water? 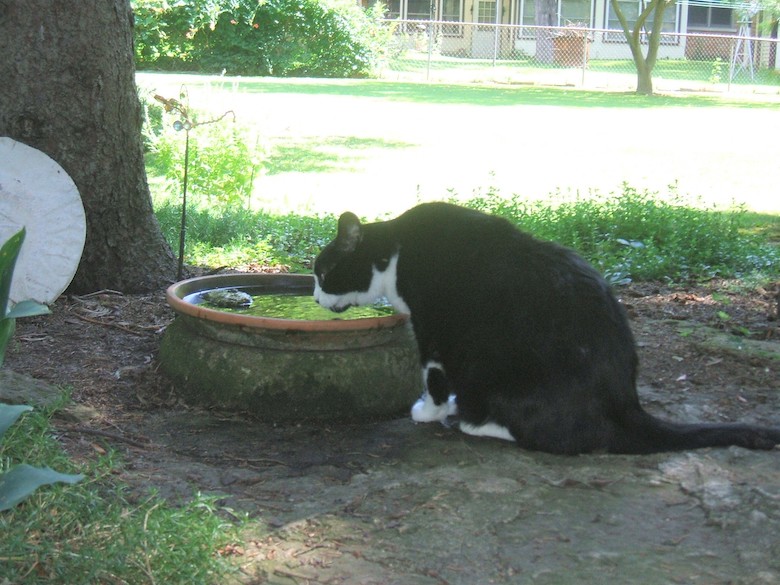 One afternoon, several years ago my cat Captain Jack Sparrow was with me in my backyard. He strolled up to a glazed flower pot saucer filled with water and started drinking. The saucer was perched upon a concrete stepping stone at the corner of my patio.

Birds took baths in the water, squirrels drank the water and so did Jack.

I joked with him that the water must have tasted like birdie feet, thus his attraction to it. He would walk away proudly with drops of water hanging from his chin fur.

Jack was happy drinking like a lion in the wild. Because that saucer of water pleased him, I kept it filled with clean water for when he joined me in the yard.

Jack carried on over the years with an increased love of water, from drinking it to standing in it.

Jack waiting for a drink in the shower.

I moved into a smaller home with a little fenced-in yard that I planted border gardens around. Four glazed saucers now offer water in the gardens and are perched upon flower pots. This makes the saucers chin height to Jack who loves to stand and drink from them at his leisure.

Likewise, in my kitchen, I placed a red glazed saucer on a yellow flower pot and I kept it full to the rim with bottled water. Jack and my other two cats drank from it often.

Now I have a bubbling pet fountain that circulates bottled water and provides an adjustable water stream height.

When I run an oscillating sprinkler on the gardens, Jack will intentionally walk under the water drops and lick them from his fur.

When rain falls, he stands on an ottoman by a window above my porch and meows. He desires to walk on the roof in the rain, trotting across the shingles to the gutter to drink, and licking water from his fur.

When I open the refrigerator and pop the top from a gallon jug of bottled water, Jack hears it, hurries to the kitchen and stands beside me waiting for a drink.

A glass full of cold water isn’t the only beverage Jack finds appealing. He also loves juice or iced tea. He will find me seated somewhere in the house and climb up to the drinking vessel. He plunges his whole head inside of the glass to reach the liquid with his tongue.

Jack after a shower.

Jack’s obsession with drinking initially alarmed me that he could have a health issue, like diabetes. Blood tests, however, show that he is well.

Cats often have a low thirst drive, which can lead to dehydration and urinary tract issues. Cat owners sometimes find it challenging to attract their pet to water sources and get them to drink.

Thankfully this isn’t an issue for Jack. My veterinarian told me to give him as much water as he wants, however, he wants it.

You can imagine my wide eyes when he started popping up behind me in my bathtub while I took a shower. He would meow at me, soak his fur and hop back out of the tub.

I now have a walk-in shower. Jack used to stand in the shower and meow until I turned on the water. I would turn on the showerhead and he would bite at the water drops as they sprinkled over him.

Now I leave the detachable showerhead dangling and it hovers just above his head. I let the water trickle so he has access to it as he desires.

I smile over the love Jack has for water and the name I gave him which fits his personality.

I originally named him Sparrow because he was found under a bush as a kitten and was mesmerized by a flock of sparrows in the branches above him. His name morphed into Captain Jack Sparrow because I loved the character in Pirates of the Caribbean movies. My feline Jack also displays Captain Jack’s suave and funny personality.

Just as Captain Jack Sparrow stood at the bow of a ship, sporting a smile with salty sea mist in his face, my Jack runs to lawn sprinklers, a trickling shower head and the porch roof when it rains.

Read Next: Here’s Why Cats Hate Water — And What to Do About It

How Much Exercise do Cats Need?

Did you set a New Year’s resolution to increase the amount of exercise you’re getting? Don’t forget to include your cats in that resolution. Physical exercise is important for cats of all ages. Like with people, cats who get regular exercise are generally happier and healthier both physically and emotionally. How much exercise do cats...

In my volunteer job as a cat socializer at a private shelter near my home, I met a lot of cats. But the one that stood out the most for me in the two years I spent petting kitties was a special guy named Blue. I first saw Blue on a day when I walked...