How to Calm an Angry Cat 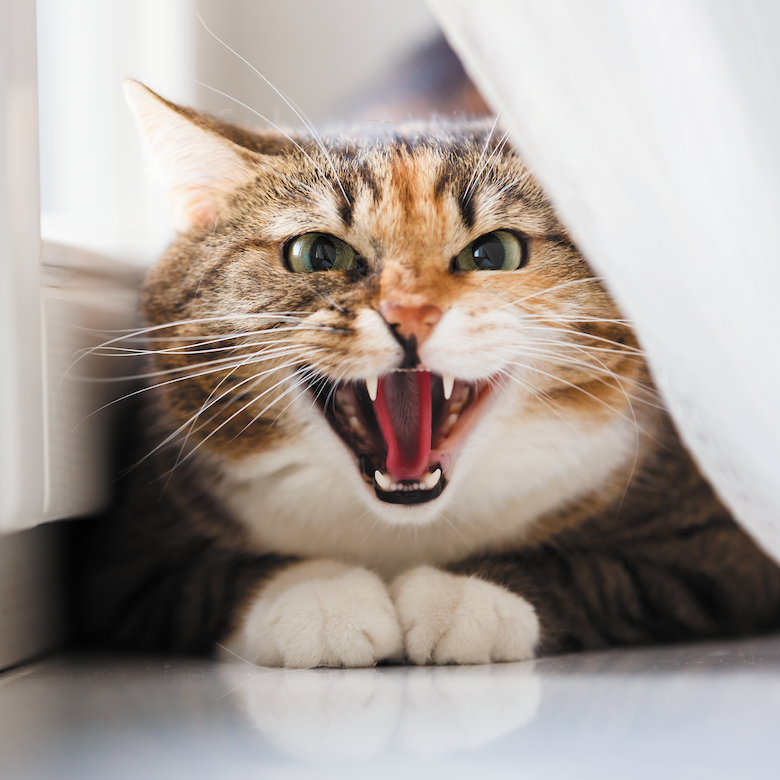 Spend a few minutes looking at social media, and you’ll agree: Cats are sweet, friendly, and cuddly. Until they aren’t.

Whether it’s your own cat or a cat you’ve just met, it can be quite intimidating when a kitty becomes aggressive and decides to lash out. As a professional cat sitter, behaviorist and cat mom to many rescued felines, I have experienced more than my share of cats who act downright scary.

Just what makes a cat turn from innocent angel to Tasmanian devil? There are as many reasons as there are cats, but it all boils down to a few main culprits:

Let’s explore the anatomy of each and how to calm an angry cat.

You’ll see cats become fearful and aggressive when they are experiencing fear or anxiety. From attachment issues that cause separation anxiety to displaced aggression that can cause a cat to attack, these cats are simply trying to protect themselves from the unknown and potential harm. Newly adopted cats, as well as your own cat buddy, can both exhibit this type of aggression.

Newly adopted cat anxiety: A newly adopted cat might exhibit this type of behavior once you get him home. In most cases, little is known about the cat’s living situation prior to being adopted, and kitty is likely to become scared and confused about what’s happening to him.
Being moved from his home, placed in a shelter, and then being adopted into your home can be a traumatic experience. He will need time to adjust. He may react by hiding, and attempts to coax him out may be met with angry hissing and spitting, until he gets his bearings and begins to trust you.

Current cat anxiety: If your current feline friend begins acting fearful and aggressive, there could be a few reasons for his change in behavior. Changes in the household can cause insecurity:

Reasons like these can trigger your cat to lash out in unexpected ways.

Many a couple have consulted me once they got married due to aggressive behavior their cat exhibited toward the new spouse. Fear and anxiety over a perceived lack of resources (their parent’s affection or the space on the bed, for example) are often the reason. Even a small change can cause a cat to freak out a little.

One of my cats, Precious, once reacted aggressively toward me after I had my nails done. She started growling and slapping at my hand!

If your cat doesn’t get enough attention or even gets too much attention, he may become irritated. You can’t bring a new cat home and just leave him alone to make his life in your home. It’s a myth that cats are loners and don’t want to be bothered by people. But you have to balance your cat’s need to have alone time, too. After all, cats need those 18 hours of beauty rest!

Under stimulation: If you leave a cat alone and never approach him, yes, he may well become an aloof, unfriendly cat who never quite trusts you or his surroundings. He may become bored, under stimulated, love-starved and decide to bite or scratch you should you try to touch him.

Overstimulation: Let’s say you did all that, and you now have a wonderfully loving relationship with your cat — for the most part. Still, there are times when your cat may swat at you seemingly unprovoked or he bites your hand when you pet him, then runs off.

This is a reaction to overstimulation. Your cat will give you subtle clues to let you know to stop touching him, but if you’re not paying attention you may miss it. Your cat bites as a last resort to ask you to stop. Also beware, if you haven’t had a play or snuggle session with your cat in a while, he could be bored, have pent up energy and may well bite you to get your attention.

I clearly remember a behavior case where I did a follow-up with someone who initially consulted with Jackson Galaxy. This normally loving cat who snuggled up with his feline cohorts in the household suddenly became venomous whenever the other cats would approach. Jackson rightly asked that the cat be seen by a veterinarian, where it was discovered the cat had an unknown back injury. After taking over the consult on the case, the client disclosed that one of the other cats had jumped on the now-angry cat during playtime. This, we surmised, caused the cat pain due to his previously undiagnosed back injury.

Pain can make a cat act in ways that are not his normal personality. I know when I am sick, I can get pretty short-tempered with people, because I just want to be left to rest and recover. It’s the same for your cat, and the only way he knows to be left alone is to become aggressive to keep people, and other animals, away.

When my cat Trouble had cancer, he had a change in behavior. While he didn’t get wildly aggressive, his normally docile behavior changed to one of isolation and growling when approached by his cat pals. Once we diagnosed the issue and got him on pain meds, he was his usual personality for the last months of his life.

Anytime you notice any kind of personality change, a visit to your veterinarian is in order. It’s not uncommon that an issue assumed to be behavioral turns out to have a medical cause and, when treated, corrects the aggressive behavior.

Help your cat through times of aggression by first pinpointing the root cause of the behavior. If it’s situational, medical or some combination of the two, the best way to correct the problem is to determine the source of your cat’s angst so it can be appropriately corrected.

A visit to the veterinarian, becoming more aware of your cat’s body language, spending time with your cat and knowing when to let him have alone time will help your cat’s mood become lighter and happier. Use of medication from your vet, over-the-counter herbal remedies, or a combination of the two, can also help calm your cat so he can be his old snuggly self again, just like all those cats on social media. Look, isn’t he sweet?!

What is Your Cat Saying? This App Translates Cat Language

Meow. Mah! Mowwwww … Exactly what is your cat trying to say with different vocal tones? Kitties definitely seem to have a range of sounds they use to make us smile, love us, pester us, and even shame us when we deserve it. (My cats have a vocal chorus that means something like “Get up...

8 Useful Cat Products to Put on Your Shopping List

Looking for something special for kitty? We’ve got the latest feline-friendly products to put on your shopping list. Ebo CatEntertain, chat, take photos, videos or livestream kitty with Ebo, a robot companion with an HD camera. It wheels, rolls and dances, or you can take control and play with kitty remotely using the Ebo app....