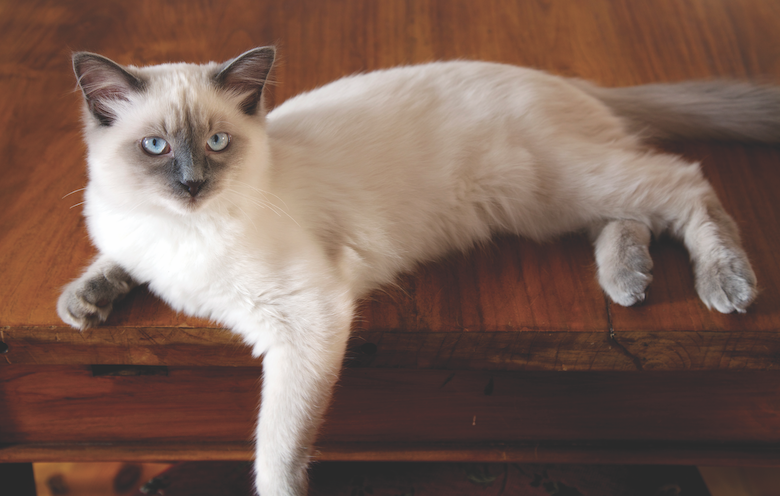 In my volunteer job as a cat socializer at a private shelter near my home, I met a lot of cats. But the one that stood out the most for me in the two years I spent petting kitties was a special guy named Blue.

I first saw Blue on a day when I walked into the cat condo “neighborhood” of the shelter. Several cats were loose in the room, playing with toys and scratching on cat furniture. But Blue was more interested in me. He rubbed up against my leg with his fluffy white coat, his pretty blue points giving away the reason for his name. When I picked him up, he gazed at me with his stunning blue eyes and melted in my arms. I cradled him like a baby — it was hard to put him down. Two weeks later when I came back to the shelter, Blue was gone. I wasn’t surprised that he had found a home.

Blue was a Ragdoll — a very special breed of cat that is not only beautiful to look at but amazing to hold. He’d found his way to the shelter because his owner had passed away. The beauty, charm and warmth that I had seen in Blue meant he wouldn’t go long without a home.

Unlike some cat breeds that have been around for hundreds of years, the Ragdoll is a relatively new addition to the feline world.

Developed in the 1960s by breeder Ann Baker in Riverside, California, the Ragdoll has humble origins. Baker adopted a long-haired, white stray cat she named Josephine and bred her to another stray she adopted from the neighborhood. The resulting kittens had very lovable personalities. Baker decided to create a new breed and selectively bred cats for a certain look and temperament.

Today, the Ragdoll is a popular breed with a luxurious appearance and a grand reputation as a show cat. But even more importantly, Ragdolls are known for being great companions.

“My favorite thing about the Ragdoll is that they are ideally suited to city living and people in need of emotional support animals,” says Nancy Hamilton, a Ragdoll breeder in Burke, Virginia. “I discovered the Ragdoll when I was trying to find a pet for my autistic child. I wanted an indoor, affectionate pet that would help draw my daughter out of her shell. It would need to put up with inappropriate play at times, be hypoallergenic and enjoy snuggling with her but also be low-maintenance. It wouldn’t require grooming or daily walks during the workday. I found all that and more in the Ragdoll.”

The outer beauty of the Ragdoll

Lovability is only one of the Ragdoll’s amazing characteristics. A semi-long, plush and silky coat is a requirement of all Ragdolls, along with vivid blue eyes. Ragdoll coats come in four patterns: bi-color, van, mitted and colorpoint. Those patterns are seen in six different colors: seal, blue, chocolate, lilac, red and cream. The points of a Ragdoll, which are located on the face, legs and tail, may be solid, lynx, tortie or torbia (a cross between the lynx and the tortie).

Ragdolls are solid cats with a medium to large build, heavy bone and long, rectangular bodies. Their legs are moderately long, and so are their tails.

But while the Ragdoll is beautiful to behold, the breed’s personality is his most treasured trait.

“There is no other breed of cat that is as friendly as the Ragdoll,” Nancy says. “The breed has a personality more akin to the domesticated dog. Ragdolls are extremely happy to see people and are outgoing, friendly and loyal. They are ideal pets because they’ll greet their owners at the door and will sit with their humans on the couch or on their laps. They want to please and spend time with their humans, much more like a type of dog than a breed of cat.”

Does Your Cat Love Water?

One afternoon, several years ago my cat Captain Jack Sparrow was with me in my backyard. He strolled up to a glazed flower pot saucer filled with water and started drinking. The saucer was perched upon a concrete stepping stone at the corner of my patio. Birds took baths in the water, squirrels drank the...

Should Your Cat Hunt For Food?

Cats are natural hunters and in need of daily exercise. A simple way to increase the amount of activity in your cat’s day is to stop feeding your cat in a bowl and allow your cat to “hunt” for their meals.  Instead of just putting your cat’s meals into a bowl or on a dish, you...