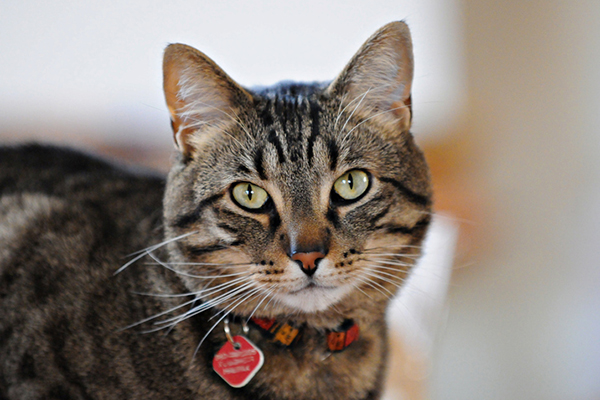 People sometimes call the average domestic cat a tabby, but tabby is not a cat breed — it is actually the pattern of kitty’s coat. And it happens to be the most common of all the feline coat patterns. Technically speaking, no matter what colors or markings you see on your cat, all felines possess the tabby cat gene. Other cat colors or patterns may hide those tabby markings, but they’re always present.

Sometimes you can see those faint tabby markings on a solid-colored cat who is sitting in the bright sun. And have you ever seen a solid red or orange or cream cat without the familiar tabby markings? You won’t, because the gene that makes a cat red or cream also makes the tabby markings visible.

All tabbies have thin pencil lines on their faces, expressive markings around the eyes, and a distinct letter “M” on their foreheads. Some believe the “M” is for Mau, the word for “cat” in ancient Egypt. Others think the “M” stands for Mohammed, who loved tabbies. Still others believe it is the blessing of the Virgin Mary.

Related: What It Means to Be a Tabby?

There are five types of tabby coat patterns, each possessing its own unique markings. We’ve listed them below alongside photos of each.

See if you can figure out which tabby your cat is:

The classic tabby has bold, swirling patterns along his sides — much like a marble cake.

This tabby is called a “blotched tabby” in some regions. The pattern of circular smudges on the classic tabby’s body closely resembles a bullseye.

Ideally, the stripes are non-broken lines; evenly spaced. They branch out from one stripe that runs along the top of the cat’s back down the spine, resembling fish skeleton — which is why the term “mackerel” is used to describe it.

A spotted tabby has spots all over his sides. These spots can be large or small, and sometimes appear to be broken mackerel stripes. They can be round, oval or rosettes.

A ticked tabby cat (sometimes called Abyssinian tabby or agouti tabby) does not have the traditional stripes or spots on her body, and may not, at first, seem to be a tabby. However, like all tabbies, this coat pattern has tabby markings on the face and agouti hairs on the body.

What are agouti hairs? If you look up close at the lighter parts of a tabby’s coat, you will see that the individual hairs are striped with alternating light and dark bands, known as the agouti hairs. The ticked pattern is displayed prominently in Abyssinians but also appears in mixed breeds.

This is the term used to describe a tortoiseshell (also called tortie) tabby. In the typical form, there are separate patches of brown tabby and red tabby on the same animal.

A tortie who also carries the tabby gene is often called a torbie. Patched tabbies can show any one of the above four distinct tabby patterns. The markings are usually more apparent on the legs and head.

This piece was originally published in 2015.

Read Next: The Science Behind the Fur: What Makes Black Cats Black

Looking for a way to celebrate our feline friends this month? Here are a few fun March 2021 cat events. NOTE: Due to the coronavirus pandemic, many events have been cancelled. But here are some virtual events you can check out. All month: National Nutrition Month Sixth- through eighth-grade students are invited to enter the...

Save a Life, Foster a Kitten

Almost every day I get emails from animal shelters begging me to care for kittens until they’re old enough to go up for adoption. Shelters (the term I’m going to use for both independent rescues and municipal facilities) are desperate for foster homes to take what I call “tweans”— weaned but too young to survive...