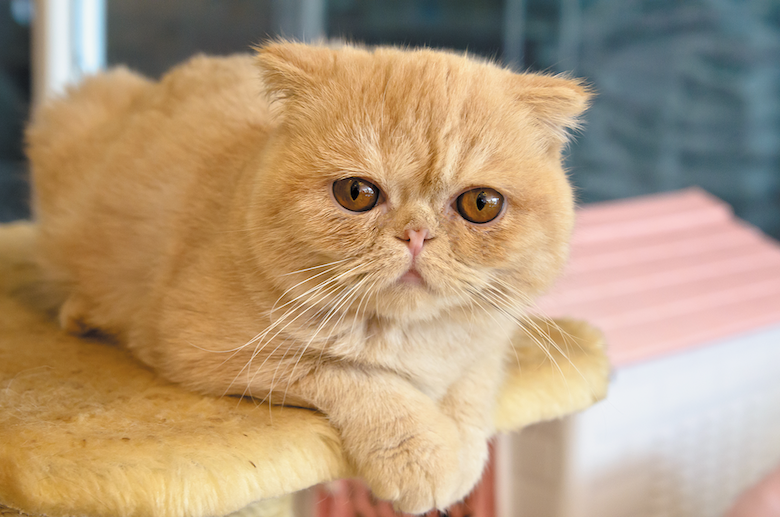 Laid-back, yet lively and with looks to kill, this feline will snuggle her way into your good graces with one slow blink of her expressive eyes, one quick peek at her sweet smile and one quick touch of her plush coat.

What’s in a name?

Just the Exotic. One name, like Madonna. Sometimes known as the Exotic Shorthair, or, our personal favorite, “the lazy man’s Persian.”

Not quite a Persian

While those Exotic kittens who are born with long hair (rare, but possible) can be registered as Longhair Exotics or Persians, the standard shorthair Exotic is a breed in and of herself — and a charming one at that.

Created by accident (always a fun origin story!), the Exotic came to be when American Shorthair breeders decided to add green eyes and silver coats to their kitties. To do this, they needed to breed their cats to Persians. The result was unexpected. As opposed to offspring that resembled American Shorthairs, breeders wound up with kittens who, while gorgeous, looked like Persians with plush, short coats. To cement the shorthair gene, Russian Blues and Burmese were added to the American Shorthair mix, with the offspring being bred back to Persians to establish a new breed: the Exotic.

Who is the Exotic?

The Exotic was originally going to be called the Sterling, and be offered only in the color silver; but when breeding didn’t go as planned, she earned the Exotic moniker and can now be found in all of the same color combos as the Persian — from solid, tabby and Himalayan to silver, gold, black-and-white and tortoiseshell.

The short, plush, dense coat unique to the Exotic creates a soft, rounded, bear cub-esque effect that makes her ultra-squishable, while her small size (weight wise, she sticks to the 6- to 13-pound category) makes her the cutest cuddly package.

One small difference
Breed standards for the Exotic and the Persian are nearly identical (both citing big eyes, a sweet expression and a short, boop-worthy nose as trademarks), with coat length being the one differing factor between the two!

The Exotic has a peaceful personality

Easygoing, loyal, quiet … the Exotic disposition is not much different from that of the Persian. In fact, the two are nearly indiscernible, what with their penchant for gazing lovingly into your eyes; adoration for giving hugs or pushing their wet nose into your face during cuddle time; and habit of sitting upon your shoulder or curling up in your lap for naptime.

The primary place where the Exotic and Persian differ is in playtime. Persians, while down to have a good time on occasion, are more apt to laze and lounge around, or attend a child’s tea party (as the guest of honor, of course), whereas the Exotic is ready and raring to go! A simple toilet paper roll or wadded up piece of paper will get her moving, but whip out a wand or puzzle toy, and she will romp until she drops!

Though equally devoted to their humans, male Exotics tend to be extremely lovey- dovey, while females lean toward embracing their independent side.

While the Exotic’s flat, squishy face is charming to look at, it does pose one problem: breathing. It’s not an issue for all, but many Exotics fall victim to breathing problems and have heat sensitivity. To keep both issues at bay, Exotics need to live in a home that is well-ventilated and air conditioned from kittenhood to their golden years (which is upwards of 15!).

Why the Exotic makes the purrfect family member

Exotics are fairly quiet, emitting a melodious meow every now and again, and are quite content giving you the privacy you need (as they sprawl out on a tile floor and snooze). The one quirk (albeit a cute one) is their penchant for plotting when their toys are taken away. That feather wand with bells you placed on top of the fridge (out of paw’s reach) after playtime? Yeah, she’ll spend hours gazing at it from the floor trying to figure out how to get it down. Choose your hiding places wisely.

Read Next: 20 of the Most Popular Cat Breeds

Do Cats Get Lonely Or Are They Fine Without Other

Tigers live as solitary hunters in jungles. Lions live in prides in grasslands. But what about our domestic cats? Are they loners like tigers or social like lions? Yes and yes, and no and no — depending on the cat and the situation, experts say. We talked to some of those pros to try to...

How to Keep the Peace Between Your Cat and Toddler

New parents are often (and understandably) concerned about how their cat will react to a new baby. But even if things go well and the cat warms up to a newborn, life changes when your baby turns from a stationary bundle of joy into a toddler. “The toddler is a little different than the baby,”...