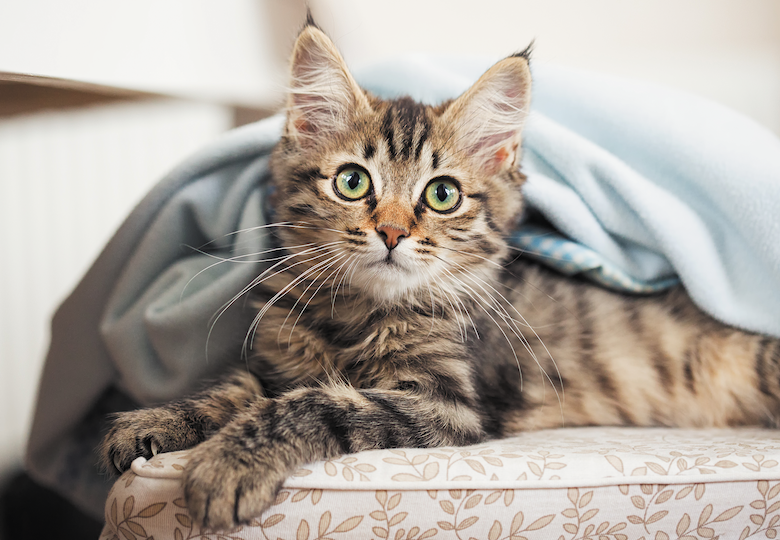 If a beautiful behemoth is what you’re seeking in a feline companion, the Maine Coon has what you’re looking for. The loyal, dignified, majestic Maine Coon represents all of this and more — and does so while serving some serious #hairgoals.

Believed to be the oldest cat breed native to North America, the Maine Coon has made a name for herself among Mainers since the 19th century as a skilled mouser, farm cat and shipyard companion. Where she dwelled prior is somewhat of a mystery. Some say she arrived alongside the Vikings; others say she’s a descendant of Marie Antoinette’s adored long-haired cats; and still others mark her as a stowaway who arrived stateside with sea captains who sailed the ocean blue.

How big is a Maine Coon?

She’s hefty for good reason. A native New Englander, the Maine Coon has evolved in a Darwinian, survival- of-the-fittest type of way, to live up to her working cat name and successfully survive the harsh winters of the Northeast. That said, this gentle giant is among the largest domestic cat breeds in the world. Females weigh in at 9 to 18 pounds and males tipping the scales at 20 pounds or more. And they don’t reach their full size until they’re 5 years old.

According to Guinness World Records, the title of Longest Domestic Cat has been held by Maine Coons for more than 10 years. The current titleholder is Italy-based Barivel. At last measurement in May of 2018, Barivel was a whopping 3 feet 11 inches!

Does a Maine Coon need lots of grooming?

The Maine Coon’s coat is her crowning glory. It’s comprised of not one, not two, but three distinctive lengths — a heavy and short length rests upon the shoulders; longer lengths can be found on the stomach and upper hind legs (britches); and a romantic, lion-esque ruff can be seen about her neck. Then there are the tufted paws reminiscent of snowshoes that allow for treading in cold temps. And to top it off, we have that luscious plume of a tail, which can be wrapped around her body for both warmth and protection.

You’d think the Maine Coon would need a lot of grooming, but that’s a negative. The Maine Coon’s coat, while thick and long, rarely mats and requires only weekly combings to keep it in tip-top shape!

Many believe that the Maine Coon earned her moniker because she’s part cat, part raccoon. While her markings and bushy tail may have you thinking the same, such a pairing is biologically impossible but an interesting concept nonetheless. Photo: Getty Images

Are Maine Coons good with kids?

Kids, cats, dogs … they don’t call her a Gentle Giant for nothing! The Maine Coon, who possesses a lengthy life span of 10 to 13 years, is known for her friendliness, affection and compassion, so she makes an excellent companion animal for all ages — and species! The breed has been dubbed as an excellent choice for emotional support and therapy pet purposes, as she’s so purrfect at reading cues from her people!

Love to be loved
Maine Coons are so laid-back and loving, they’re not opposed to playing dress-up or going for a ride in a baby carriage. As long as they’re being lavished with love and attention, anything goes!

Is a Maine Coon easy to train?

Intelligent and curious, the Maine Coon has often been described as dog-like due to her desire to play fetch and ease of learning to walk on a leash. Another canine quality she’s known to possess? An affinity for water! Don’t be surprised to find her splish-splashing in your sink, turning her water bowl into a swimming pool, or attempting to dive headfirst into the bathtub!

Though she’ll meow and purr like any other feline, the Maine Coon is known for her cute communication skills. You’ll often hear her chirp, cheep or trill to get your undivided attention.

The Maine Coon loves to be all up in your business all the time, so if you really desire a little privacy, you’re going to have to close a door to score a little me time. You’ve been warned.

Read Next: 5 Important Lessons Kids Can Learn From Cats

Hypoallergenic Cats — Get the Facts

According to The National Institute of Allergy and Infectious Diseases, between 6 and 10 million Americans are allergic to cats or other pets. If you’re an allergy sufferer who also happens to be a cat lover, you may be interested in low-allergen cats. But what makes a cat hypoallergenic? Low-allergen, or hypoallergenic cats, are those...

My cat, Stella, never met a bowl of wet food she didn’t like, which has become an issue in her later years. I decided to broach the topic, gently. ©cglade | Getty Images   Hey, Stella — it seems like you’ve put on a few pounds lately. I know! Isn’t it great? I feel like...