Go Back to Shop All CategoriesCat BlogDog Blog
HomeBlogCat BlogWant to Know What Your Cat is Saying?

Want to Know What Your Cat is Saying? 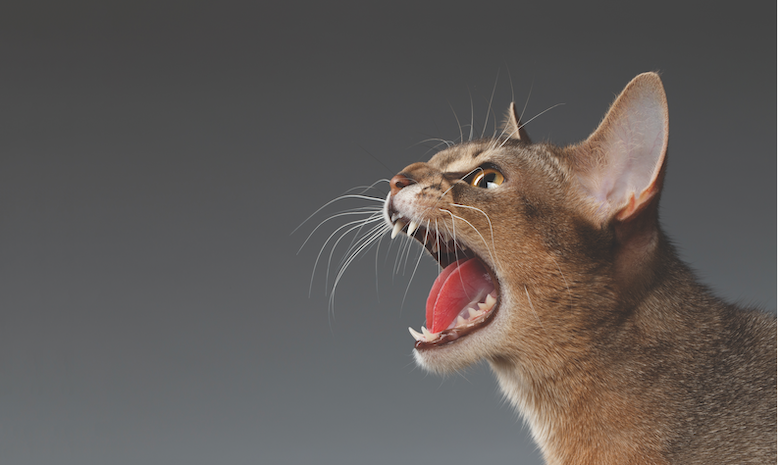 It’s 4 a.m., and your cat is meowing in your ear. Is it a series of shorts mews or in rapid-fire succession? When a toddler accidentally pulls your kitty’s tail, what is your feline saying when she hisses at this little person?

Cats have a large repertoire of sounds. Every year veterinary behaviorists discover more and more sounds when trying to decipher what cats are saying. What makes their research complicated is that cats can mix multiple sounds together with different inflections, just like humans mix sentences together that can have multiple meanings.

Dr. Sharon Crowell-Davis, professor of Behavioral Medicine and a board-certified veterinary behaviorist at the University of Georgia College of Veterinary Medicine, says cats vocalize much more than dogs and make more than 100 sounds.

The Georgia veterinarian believes, “It’s difficult to lump sounds cats make together. Each kitty is an individual. Sounds don’t always mean the same thing from cat to cat. They each have their own voice and dialect.” Kittens can also have a voice all their own.

And the sound means …

We picked the most common sounds cats make to help you get a better understanding of what your cats are trying to say. We asked Dr. Crowell-Davis and fellow Board-Certified Veterinary Behaviorist Dr. Meghan Herron, with Gigi’s, an animal welfare nonprofit in Ohio, to share their knowledge about feline vocalization.

The two are part of a new book just released from the American College of Veterinary Behaviorists called Decoding Your Cat, which helps cat owners translate sounds kitties make.

Short mew: The short mew is similar to asking a question and is often a greeting. Both veterinarians say when you hear a short mew, your feline may be asking you a social question, such as “Are you worried about me? Can you pick me up so I can avoid the dog?”

Rapid-fire meow: Dr. Herron believes the rapid-fire meow can mean “more distress, concern, discomfort or simply something to signify that the cat needs attention.” The common meaning is, “I’m hungry. Feed me now!” Often, the cat is excited.

Chirping or chattering: This kind of cat noise can be tough to describe. Some people think the cat is chirping like a bird, others think they’re simply chattering their teeth. Whatever you call it, it’s often part of a cat’s natural hunting instinct.

Dr. Herron says you can often hear this sound when your feline is sitting in front of a window staring at birds or chipmunks, because they’re excited about the potential for prey. It also could mean frustration, because your cat can’t get to that bird or wild animal.

Long plaintive meows: Usually these kinds of long plaintive meows can indicate worry, annoyance or an objection to something. They tend to be more repetitive, and the cat usually wants something specific. Maybe they want food or to be able to get out of the room they’re in. This can be the kind of meow that wakes you up when kitty wants breakfast.

Growling: Growling is a sound that indicates a cat fight is about to begin. It’s a cat-to-cat sound that says “back off,” Dr. Herron says, “Think of this as a warning sign that your cat is seriously perturbed about something and needs some space.”

Related: How to Introduce Your Cat to a New Cat

Purring: Of course, purring is a well-known cat sound that humans love to think is a sign of being content and happy. While that can be true, Dr. Herron says on some occasions, “Purring can be a sign that your cat is in pain or discomfort, and a way that cats soothe themselves.”

Hissing: Go to any veterinary clinic, and you might see a cat hissing. “Cats can hiss at animals and people if they feel threatened, scared or in pain,” Dr. Herron says. “If kitty is hissing and there’s no reason as to why they are being provoked to make this sound, it could be that your cat is in pain.”

Trilling: Cat trilling is a sound that kitties make when their mouth is closed. Most cat sounds are made with their mouth open. It’s also how mama cats get their kittens to pay attention or follow them. Dr. Crowell-Davis says, “Trilling almost always means something positive, a friendly happy greeting.”

Yowling: Female cats in heat often make this sound, trying to lure tomcats to ease their desire. Intense yowling can also mean the final warning that a major cat fight is about to begin, and it can also mean the cat is in pain.

While research on cats is far behind dogs, studies have shown humans do indeed often understand what their kitties are saying. Behaviorists are learning more and more about cat language, and both Drs. Crowell-Davis and Herron believe there’s so much more to learn.

Both veterinarians think societal views of felines are changing, with more and more people welcoming and loving cats as members of their families.

That’s put pressure on them and other animal researchers to learn as much as possible, to understand kitty’s special language to foster the human-animal bond.

Read Next: Is Your Cat Staring at You? What It Means in Cat Language

Leap Into 2021 With These Cat Calendars

We think we can control our cat’s behavior. Laughable! We sometimes put in boatloads of research in our pursuits to train our favorite kitties and certainly come up with expert suggestions; however, ultimately, the cat trains us. Here’s a little feline feedback on humans’ attempts at training them — take it with a grain of...